Vancouver, B.C., April 28, 2020. Quadro Resources Ltd. (“Quadro” or the “Company”) (TSXV:QRO) is pleased to provide an update on its projects in Newfoundland and Labrador and Ontario. During the past six months Quadro has added two significant properties to its portfolio, the Long Lake gold project in central Newfoundland and the Seagull Lake PGE property in western Ontario. These new additions, along with its Staghorn gold property in Newfoundland, gives Quadro exceptional exposure to two of the most exciting exploration regions in Canada which contain two of the most highly valued and in-demand commodities, gold, and platinum-palladium. Staged work programs are planned for both project areas once the present seasonal weather conditions are eased and field work can be carried out in a safe manner.

Work will initially start on the Long Lake claims, located along the north boundary of Marathon Gold’s property. Highlights from this property include two areas of strong gold-in-tills (up to 4.53 g/t Au in heavy mineral concentrate) which have never been followed up. The recovered gold grains consist of mostly silt-sized pristine and modified grains which suggest that the samples were collected in close proximity to the source mineralization. An exploration program consisting of prospecting, geochemistry and excavator trenching is planned. Follow up drilling will commence shortly after.

The Staghorn project is located 30 km southwest of Marathon’s Valentine Lake deposits. Drill targets include the Ryan’s Hammer prospect, located in the northeast end of the property, where prospecting has uncovered numerous angular float of altered diorite containing high grade gold up to 32.15 g/t. Limited drilling has defined two gold rich horizons. The eastern zone was discovered by Benton Resources Inc. in 2015 (drill hole RH-15-01, azim/dip 340/-45) when they intersected 0.22 g/t Au over 42.6 m in altered diorite (see National Instrument-43-101 Technical Report on the Staghorn Gold Property, NL for Quadro Resources Ltd dated June 12, 2017, by Timothy Froude, P Geo) The eastern horizon located 600 meters across strike to the west was drilled by Quadro in 2018 (drill hole ST-18-01, azim/dip 278/-50) resulting in an intersection of 0.145 g/t Au over 50 m in a graphitic horizon. True widths of either zone are not known as there has been no follow-up drilling done on these zones.

A second target in this area is also slated for drill testing. The Marks Pond Au-in-Soil anomaly is defined as a strong 800 metre by 300 metre soil anomaly (up to 7,000 ppb Au) which is coincident with the northern edge of a diorite plug and the regionally significant Rogerson Lake conglomerate.

Seagull Lake PGE Project, Ontario – Quadro has an option to earn a 70% interest in 192 claim units covering the Seagull Lake Ultramafic Intrusion which hosts a number of PGE discoveries identified in drilling, trenching, and prospecting (see Quadro press release dated Feb 02, 2020). The property is located 1 hour north of the city of Thunder Bay in Northwest Ontario and 28 km north of the new copper, nickel, platinum, palladium discoveries of Rio Tinto and Magma Metals, now Panoramic Resources Ltd. The Impala Canada (formerly North American Palladium) Lac des Iles mine (published reserves of 73M tonnes @ 2.14g/t Pd. Panoramic Resources’ website), located 50 km northwest of the Seagull Lake property, is the only primary producing palladium mine in Canada. Mineralization hosted on adjacent and/or nearby properties is not necessarily indicative of mineralization hosted on the Company’s property.

The current palladium breakout is based on supply dynamics. Increasingly stringent global auto emission standards are driven to a large degree by climate change concerns for a carbon-free transportation sector. This will require increased, sustainable production of certain strategic minerals and commodities going forward to meet critical demand. Platinum-palladium and nickel are essential to the lifeline of the EV revolution. Lac des Iles Mine by Impala Platinum underscores the globally recognized significance of the PGE-rich Thunder Bay North region.

Prior to the Quadro/White Metal Resources Corp. option agreement, previous exploration work on the Seagull Intrusion had outlined different styles of PGE mineralization including the discovery of the Norilsk-type Cu-Ni-PGE-rich basal sulphide mineralization. Drill results, prior to 2001, include 3.6 g/t PGE, 0.34% Cu, 0.21% Ni over 2.1 meters, and 1.04 g/t PGE, 0.14% Cu, and 0.16% Ni over 16 meters. (After N Pettigrew, 2002) More recent drilling and resampling of historical drill holes by Platinum Group Metals ("PTM") between 2001-2005 yielded some very encouraging grades of PGE. (See PTM news release dated 04/22/2005 and Table 1 below).

* It is not known if these drill hole intervals represent true widths and are therefore being treated as core length intersections.

Since acquisition, Quadro has initiated a compilation of the historic work and prioritized a number of PGE targets for drill testing. These include step-out holes to test continuity and extensions to the high grade discoveries identified in historic drilling and testing a PEM Off-Hole geophysical anomaly that was never properly tested in the previous drilling. The Company will also test a magnetic anomaly considered to be the feeder zone for the Seagull Intrusion and a possible source of the copper, nickel, PGE mineralization. Additional targets include the up-dip potential of the Lower Dunnite Reef Zone PGE mineralization. Compilation of the existing data base accumulated by the previous operators is in progress and additional PGE targets have been defined from the 3D Mag inversion data.

Quadro anticipates a robust program of drilling on both the Victoria Lake prospects and Seagull Lake project. Approximately 4000 meters is allocated for the initial stage one program. (2000 meters on each project area). This along with associated target definition and results’ compilation is anticipated to take 6 to 8 months with a follow-up stage two drill program to be carried out as results dictate.

Wayne Reid, P. Geo., VP Exploration for Quadro and a qualified person as defined in National Instrument 43-101, is responsible for this release and supervised the preparation of the information forming the basis for this release

QA/QC – Quadro implemented a quality control program on its drill programs at the Staghorn Project to ensure best practice in sampling and analysis. Quadro maintained strict quality assurance/quality control protocols including the systematic insertion of certified standard reference and blank materials into each sample batch. Analyses in this release were performed by Eastern Analytical of Springdale, NL with ISO 17025 accreditation. Samples were transported in sealed bags to Eastern and all samples were assayed using industry-standard assay techniques for gold. Gold was analyzed by a standard 30 gram fire assay with an AA finish.

The Seagull Lake historic drill information provided in Table 1 was taken from Platinum Group Metals press release which was compiled under the supervision of PTM’s qualified person at the time. Drill core samples from the Seagull Project were submitted by PTM to ALS-Chemex for analysis. Pt, Pd and Au analysis were conducted using standard fire assay analysis with an ICP- AES finish by ALS-Chemex on a 30 g charge. Reported Rh, Ir, Os, and Ru analysis were completed by Genalysis Laboratory Services of Australia, under contract to ALS-Chemex, by standard fire assay with nickel sulphide collection and an ICP-MS finish on a 30 g charge.

About Quadro Resources – Quadro is a publicly traded mineral exploration company. It is led by an experienced and successful management team and is focused on exploring for gold and PGE in North America. Quadro has approximately 40 million shares outstanding. The Company’s shares trade on the TSX Venture Exchange under the symbol “QRO”. Quadro owns a 100% interest in the Staghorn and Conche properties and has an option to earn a 100% interest in the Long Lake property in Newfoundland and an option to earn a 70% interest in the Seagull Lake property in Ontario.

On behalf of the board of directors, 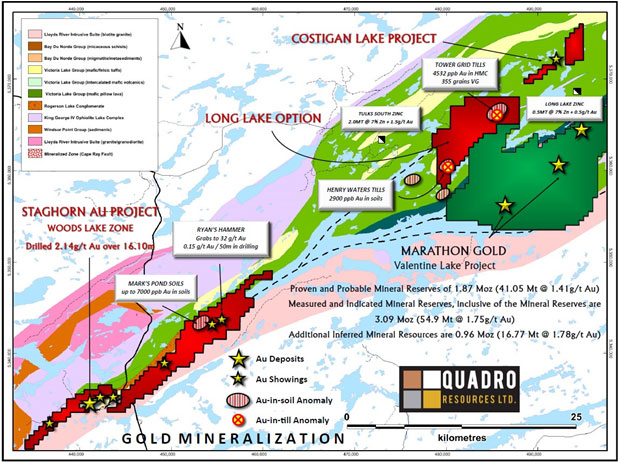